I got slightly more into the Met Gala than usual this year, refreshing my Twitter and Instagram feeds manically at 1am to see who was wearing what. Here’s my two-pence on the best dressed of the evening: 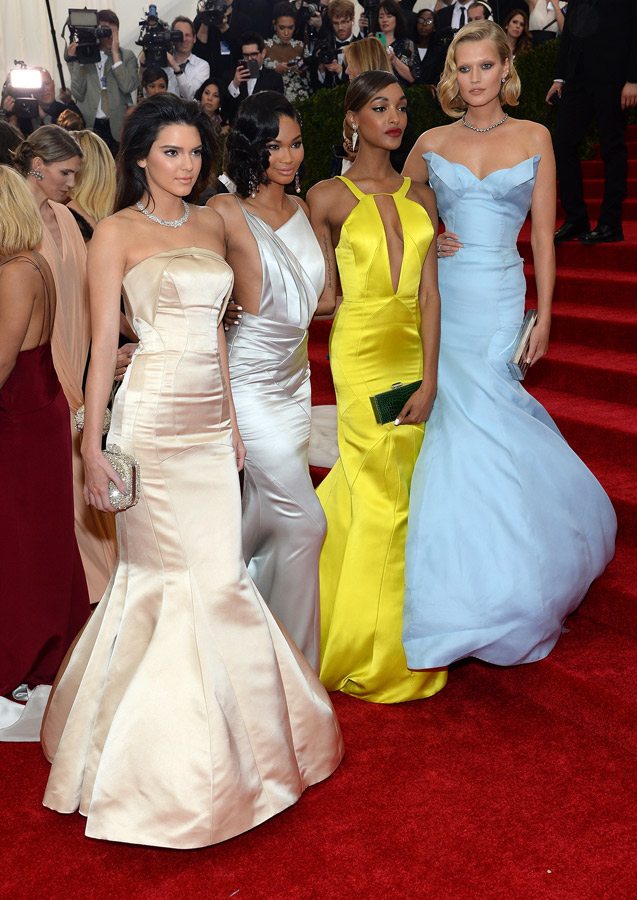 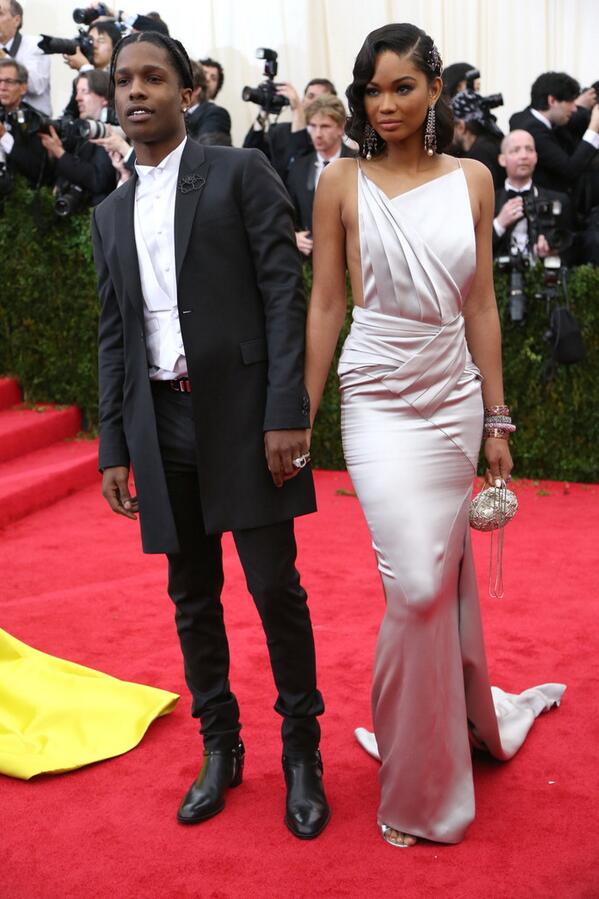 1, 2, 3, 4 – Kendall Jenner, Chanel Iman, Jourdan Dunn, Toni Garrn
The British high street really pulled it out of the bag at this year’s Met Gala – I don’t think anyone can quite believe how stunning these bespoke, figure hugging Topshop gowns were. I can’t choose a favourite out of the four, but I think it’s between Kendall’s mesmerizing strapless champagne number and Chanel’s silver backless dress. A special mention to the most killer couple of the evening, Chanel Iman and A$AP Rocky, too – his tux was Topman! 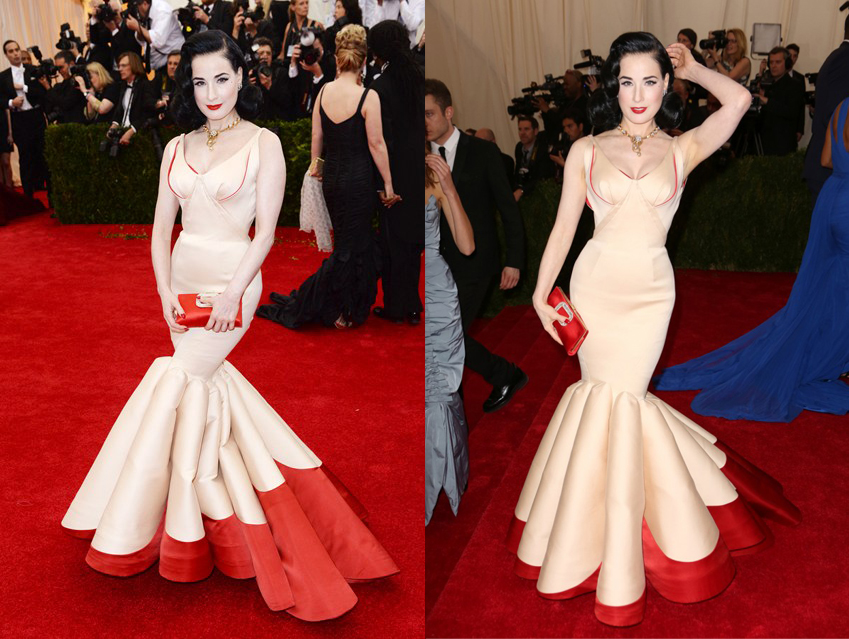 5 – Dita Von Teese
Zac Posen is king of the exaggerated silhouette, so he was the perfect choice for Dita and her sculpted hourglass figure. I particularly love the bodice of this gown with the subtle red detailing, but of course the huge fishtail is the real attention grabber. I also loved Karen Nelson and Liu Wen in Zac Posen. 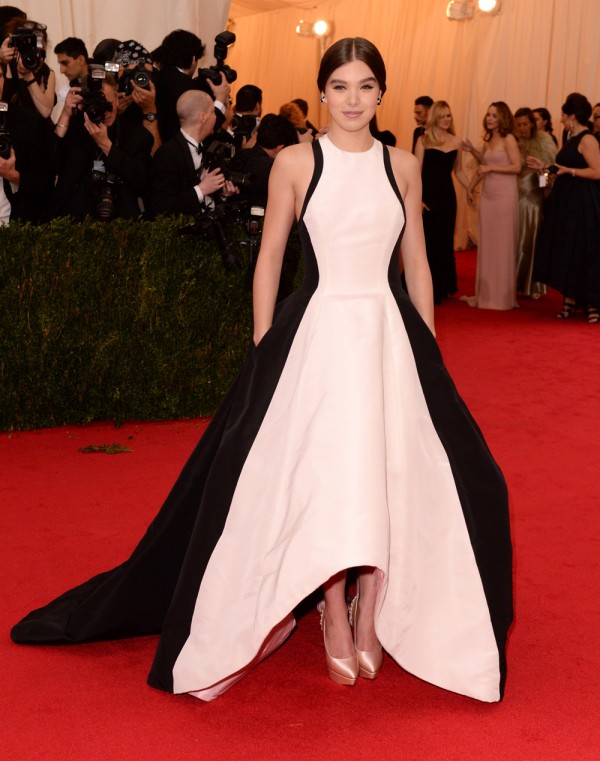 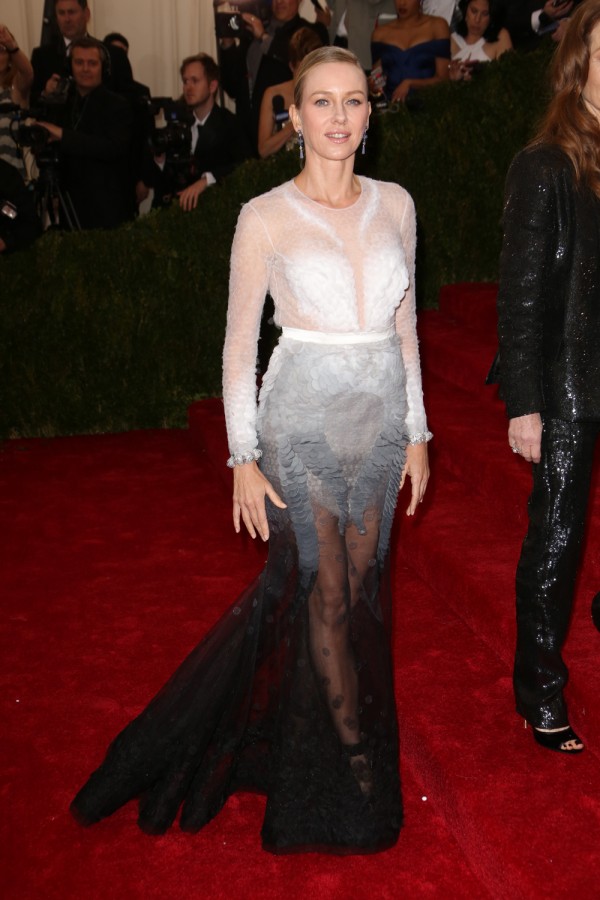 7 – Naomi Watts
Naomi Watts looked as stunning as would be expected in Givenchy Haute Couture. I especially love the colour gradient – ombré isn’t dead just yet! 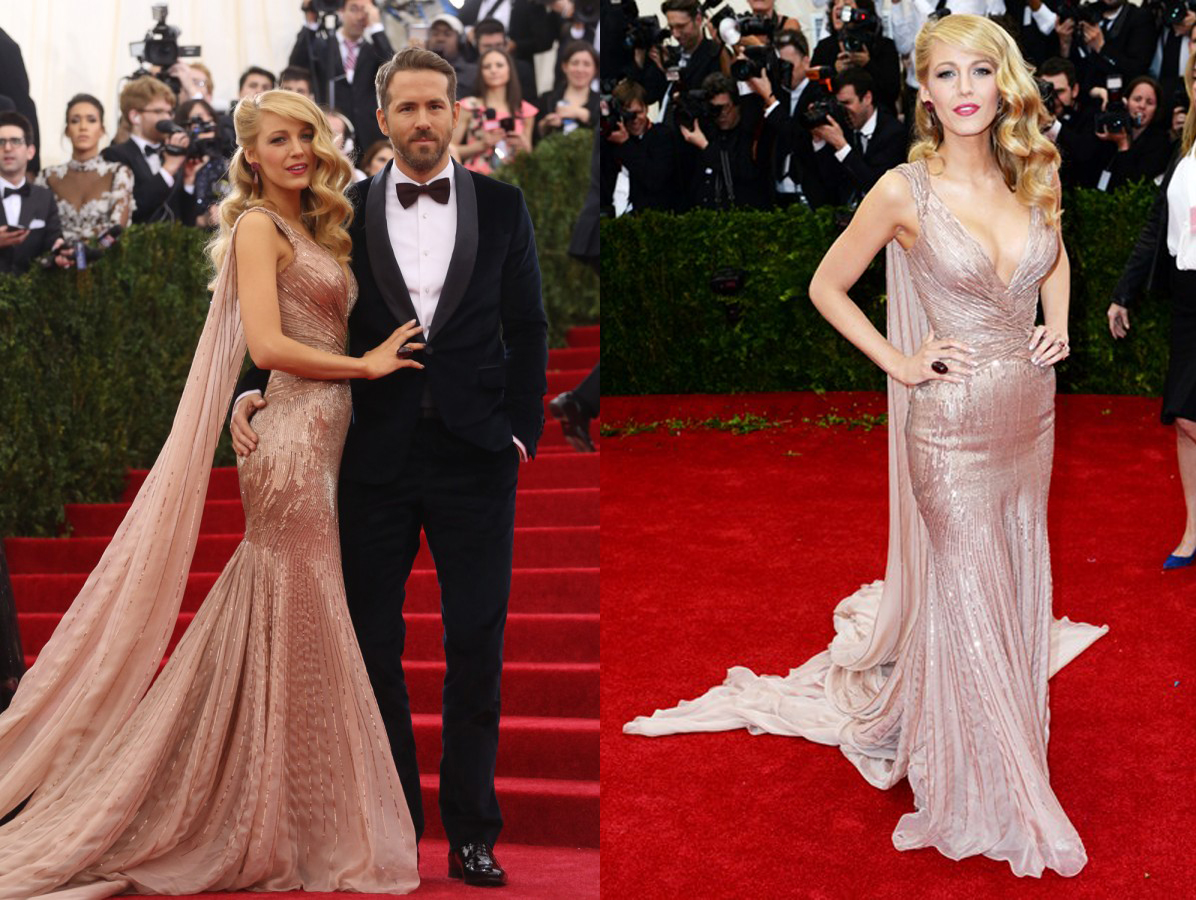 Blake Lively was a Grecian goddess-like dream, and Ryan Renolds looked pretty suave too! Both wore Gucci, but of course Blake was the star of the show. The pale blush pink complimented her beautifully and the dress hit every curve perfectly. I think Blake will be topping many a best dressed list this year! 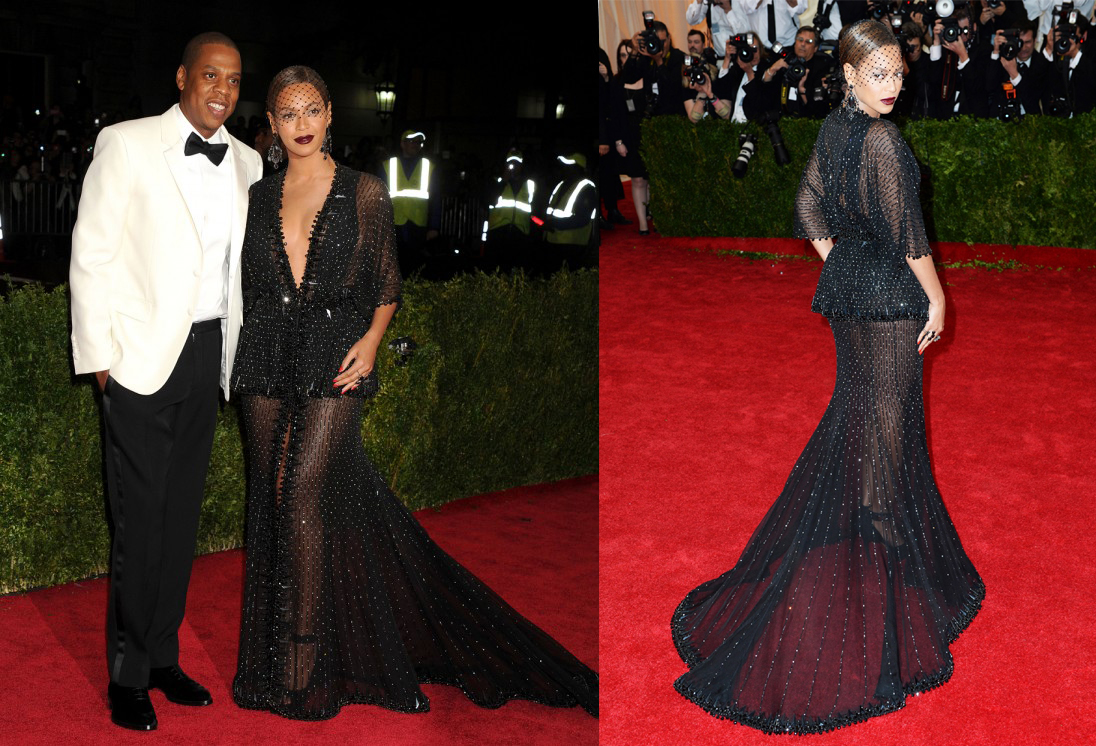 9 – Beyoncé
This list wouldn’t be complete without Queen Bey! She more than made up for last year’s slightly, erm, interesting flame printed number in this super sexy sheer Givenchy Haute Couture dress. 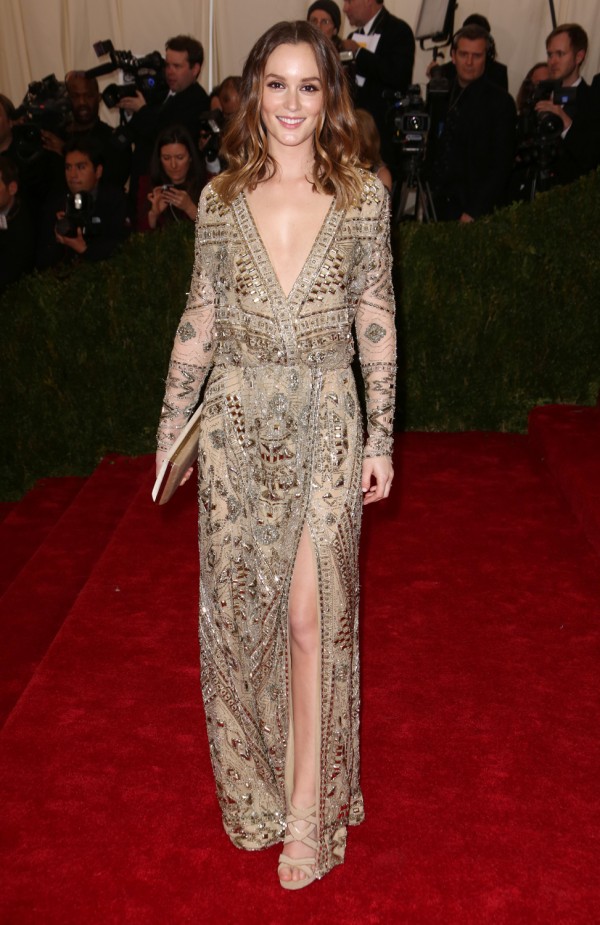 10 – Leighton Meester
Heavy embellishment is always a winner for me, and this stunning Emilio Pucci AW14 gown worn by Leighton Meester hits that nail right on the head. If you’re looking for prom right now you could definitely channel this vibe for a fraction of the price with a Virgos Lounge dress. 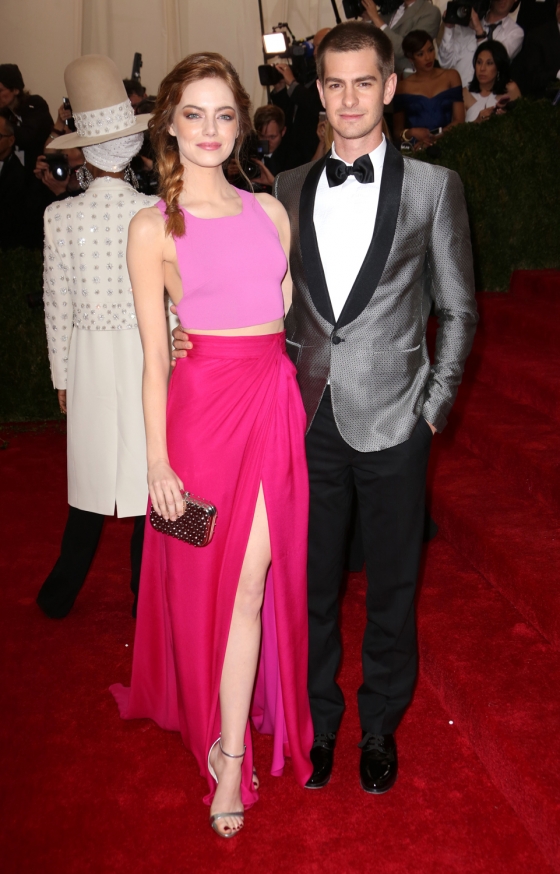 11 – Emma Stone
Now I’m not sure whether my inclusion of Emma Stone on this list is mainly due to my growing girl crush on her or not, but I love the bold colour choices she made – gingers can wear pink! A lot of celebs did the two-piece well, including Rihanna, Cara Delevigne and Anna Hathaway, but Emma’s Thakoon look was my fave by far. 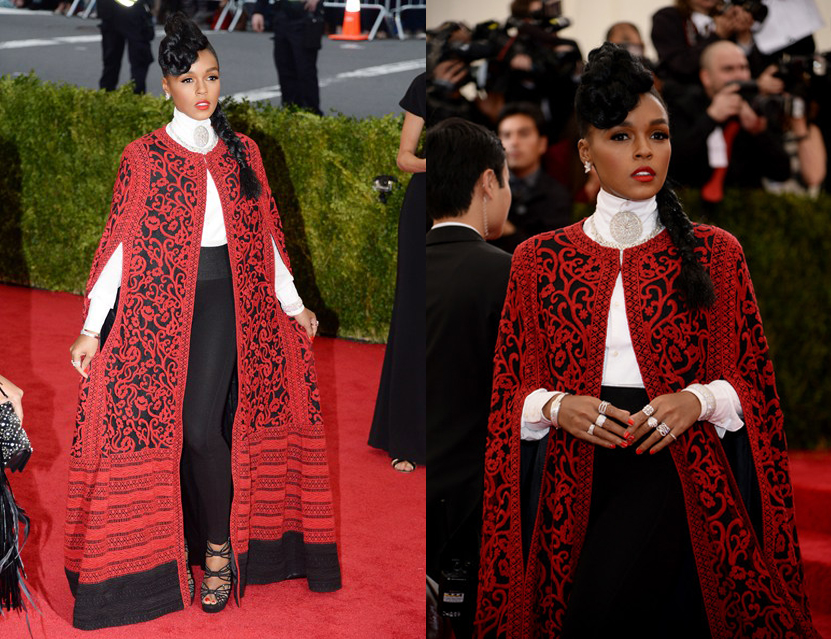 12 – Janelle Monáe
Janelle Monáe’s outfit was my favourite “different” look of the evening – she looked absolutely insane in a floor length printed cape over a shirt and trouser combo with an androgynous feel by Tadashi Shoji. Plaits were all over the red carpet this year too, but I think Janelle’s was the best! Perhaps a little too adventurous for most, but she rocked it. 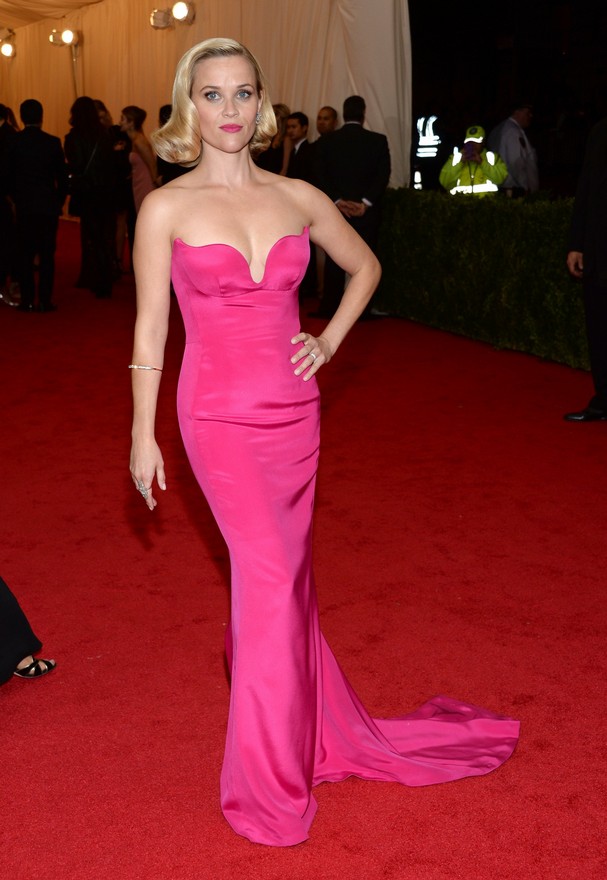 13 – Reese Witherspoon
The whole Stella McCartney gang (which included Cara Delevigne, Rihanna and Kate Bosworth) looked phenomenal, but Reese was the stand out of the bunch for me. That neckline paired with that colour, bravo!

And so concludes my two-pence. I also loved Suki Waterhouse, Dree Hemingway, Joan Smalls, Kristen Wiig, Elizabeth Olsen and Georgia May Jagger, and my worst dressed of the evening were probably Kate Upton (Pirates of the Caribbean extra, anyone?), Lily Allen (I know it was Chanel but it looked a lot like an A Level art project), Zoe Saldana and Maggie Gyllenhaal. Lupita Nyong’o was a bit of a disappointment too after absolutely nailing it at every other red carpet event so far, but she looked 100x better than anyone else would have in her green Prada number. If you enjoyed this post, check out what I wore to my end of year Law Ball at the weekend here!
Facebook / Bloglovin / Instagram / Twitter / Lookbook
Photos via Vogue, InStyle, Look and Twitter.