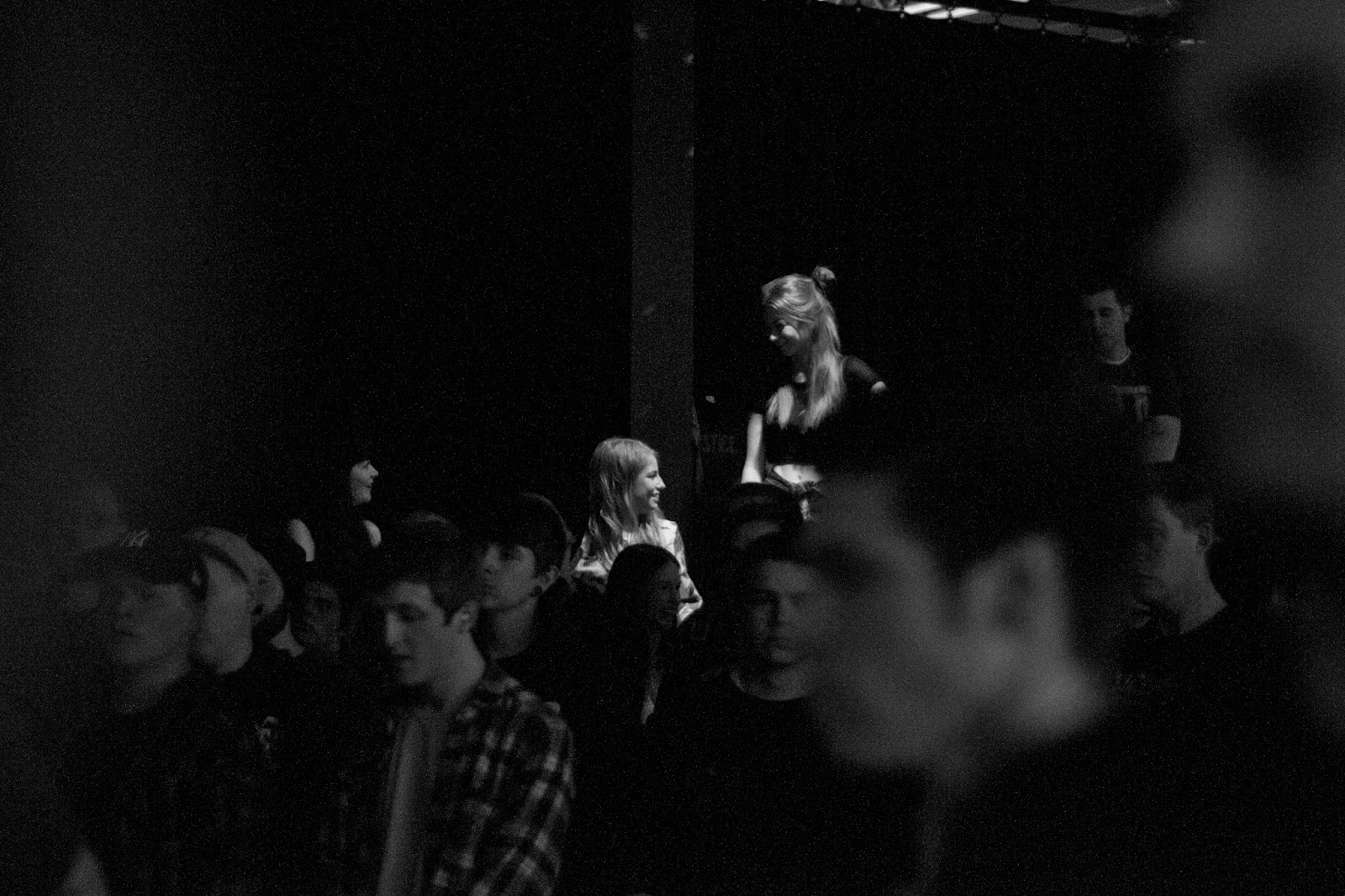 With my friends Toni and Hannah at Title Fight in Antwerp, May 2014
(unknown and slightly odd source)

I want to write more about music on my blog but I’m in an awkward position where (I imagine that) almost no-one who reads my blog cares what music I’m into, and almost no-one who is involved in the same sort of music scene as I am cares what I think about it. Nevertheless, inspired a little by Zoe and Lily‘s ‘soundtrack to my life’ YouTube tag, I’ve decided to do it anyway as it is what I spend around half my life preoccupied with. Now, it is very difficult to write about a show/gig/concert/etc, without sounding embarrassing, so I’m going to try to keep each little section short and sweet and keep my adjective usage to the bare minimum. I hope this interests at least a few of you, and please let me know if you’d like to see similar in the future!

~
For me, live music in 2014 has largely been a year dominated by reunions and old favourites. Two of my stand out shows of the year were Neutral Milk Hotel and Mineral, bands who split up in 1999 and 1997 respectively but are two of my absolute favourite bands and have been consistently throughout various other phases of my music taste. The fact that I got to see them both play this year is absolutely insane – granted I had to travel to the US for Mineral, but I will be seeing them here in February too. I am still yet to be moved to tears by a live show but I was mesmerised to a level that is laughably lame during both of these, in a way that I have been only once before (at Bon Iver).
The Mineral show was part of The Fest in Florida which some friends and I decided to make the trip over for this year – other stand out bands there were The Hotelier (although annoyingly I only caught a few songs, it was excellent), and of course The Descendants. 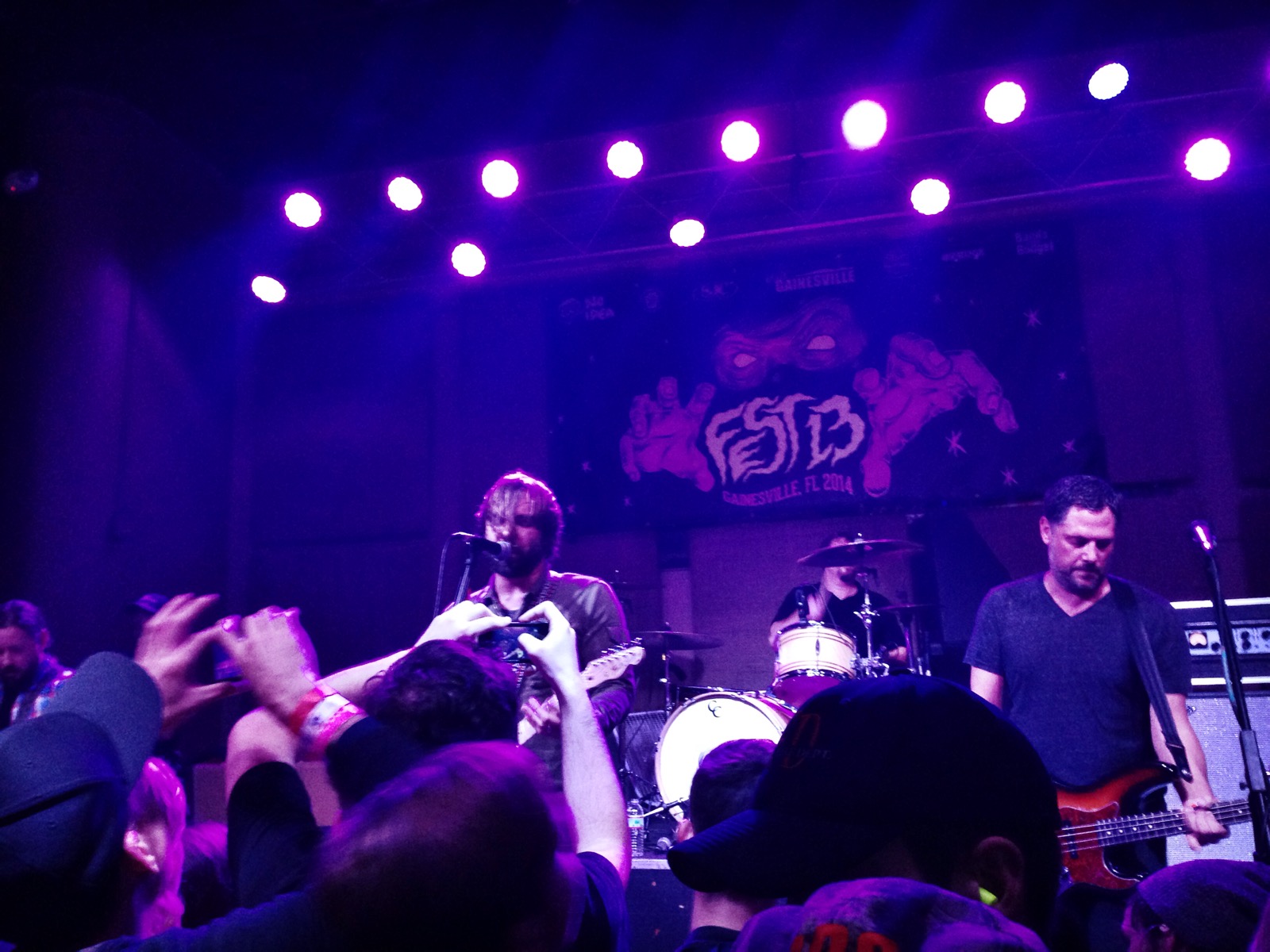 Mineral at Fest 13, November 2014
I also finally got to see Fall Out Boy this year, after previously missing out on UK shows for various reasons (and really missing out on small shows that some of my friends went to in the early 2000s due to the fact that I was a child at the time). FOB is my ultimate guilty pleasure; everything post Infinity On High is of no interest to me, but I definitely listen to Take This To Your Grave and/or From Under the Cork Tree on a monthly basis at the very least. The show was at the Phones 4U Arena in Manchester which is just crazy huge and, I feel, doesn’t provide the atmosphere best suited to a band like FOB as their live show just isn’t big enough, or good enough if I’m brutally and objectively honest, but I loved it and had the best time nonetheless!Speaking of guilty pleasures, if memory serves me correctly, the first show I went to in 2014 was Mayday Parade, thanks to a hookup by a friend, and despite having released 3 or 4 records since the one I care about they played all the best songs from it.
I’ll talk about Brand New here too – a band I never got that into as a teen emo (I was team Taking Back Sunday) but who I’ve grown to appreciate way more in my old age (ha). I saw them back in April in Manchester and they were absolutely incredible, a highlight of my year for sure and a far better live show than TBS (sorry!!), partly down to the fact that they have never released a bad record and partly down to the fact that they’re just really, really good. Saves The Day also played, which was fun.In case that wasn’t all enough for my 14 year old self, I went to Hawthorne Heights‘ 10 year anniversary tour for The Silence In Black and White, where they played that record from start to finish. It was embarrassingly great (until they played some new songs afterwards), and I’m glad I got that one out of my system. 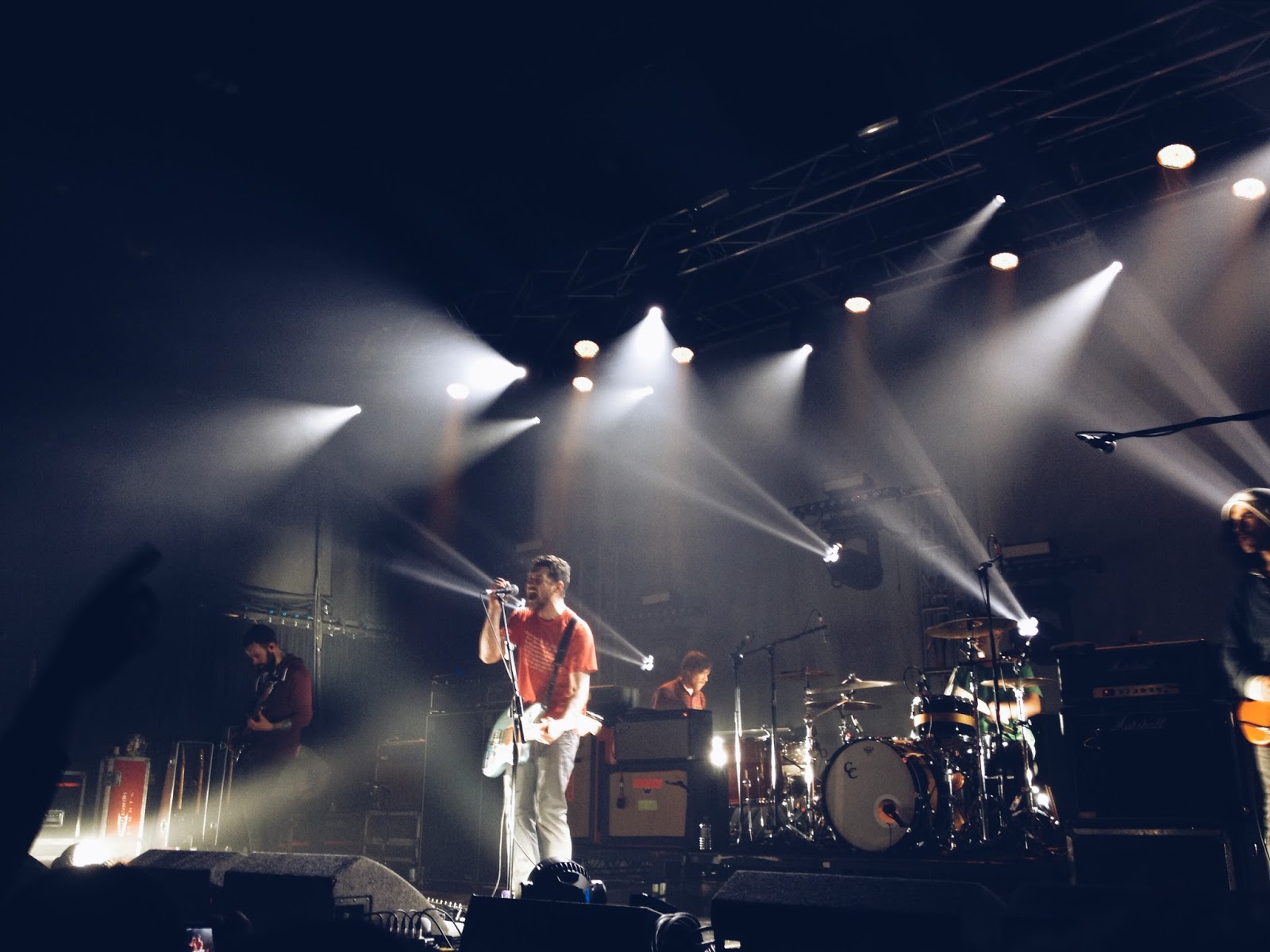 Brand New in Manchester, April 2014
Stepping forward from the 1990s and early 2000s, another highlight was seeing Title Fight in Antwerp. Now I’ve seen Title Fight a number of times before, and it’s difficult to beat their show at the Star & Garter, but this was so much fun. Perhaps because it was coupled with a trip to Antwerp and Brussels (two lovely cities, if you’re in the mood for a weekend city break), perhaps because Justice, Survival, Not Afraid, Sportswear and Headroom also played great sets, or perhaps just because Title Fight is just a great band. I’m definitely excited to hear their new record, and see them again at Outbreak Fest in 2015. I also saw Manchester Orchestra, another band I have loved since my early teens, but never managed to see play (partly due to the fact that the times they did play here were, to my knowledge, at 18+ venues before I turned 18, or at festivals which I didn’t attend). It was magical and Colly Strings was so emotional, but I did see a man pee in a cup instead of go to the toilets approximately 3 metres away. 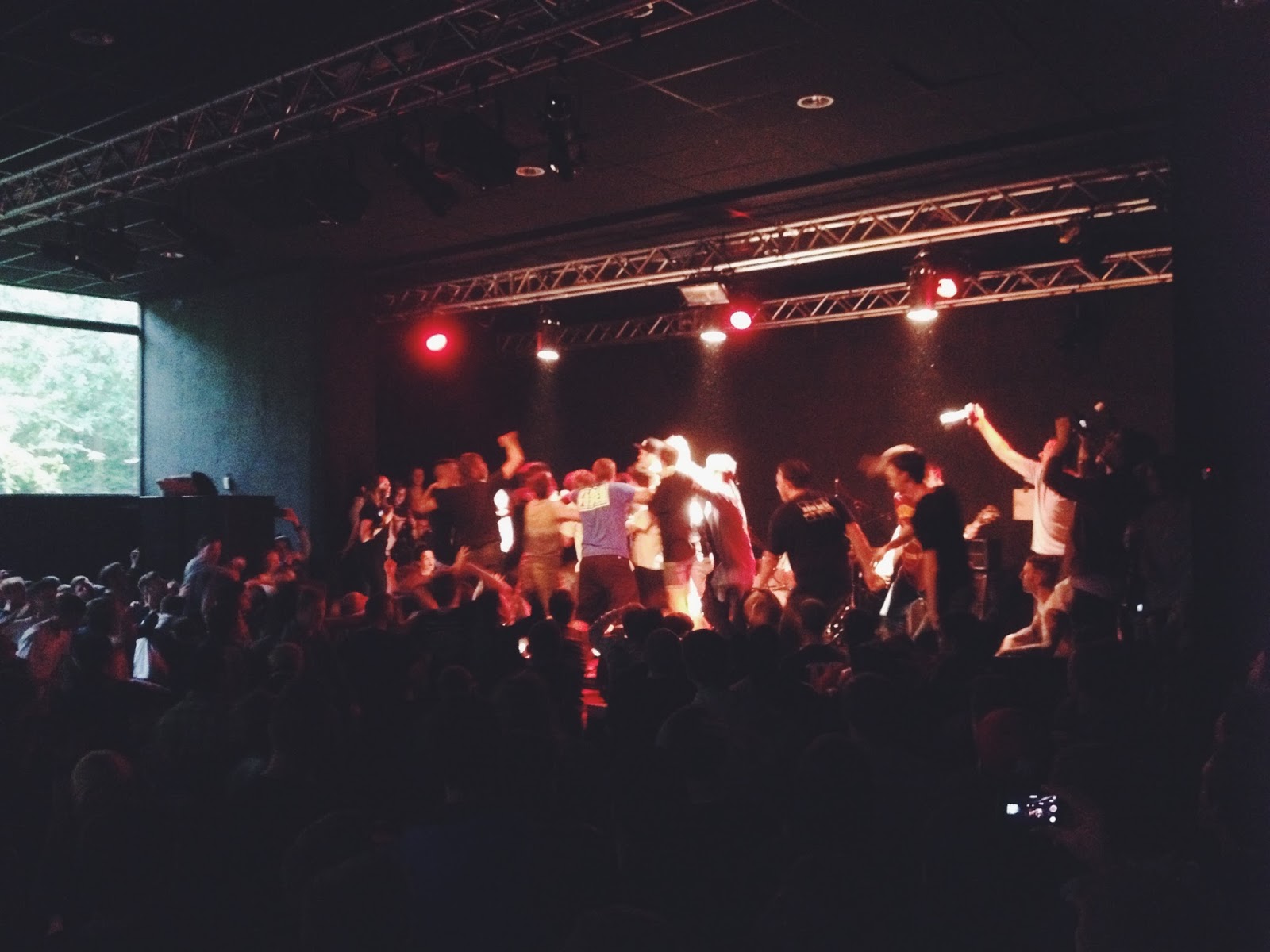 One thing that 2014 lacked in for me has been hardcore shows. I enjoyed Twitching Tongues early on in the year, and I did see Turnstile again in the summer. I also saw Stick Together, Take Offense and Cold World at Outbreak Fest – none of which were mind-blowingly great, but pretty cool nonetheless. Fingers crossed for some better things in 2015!

Other honourable mentions of the year were Merchandise (incredible band but oddly hardly anybody went), Headroom‘s first show, Citizen, Nothing, Taking Back Sunday, Balance and Composure, Seahaven, Diamond Youth, Nai Harvest, Walleater and last but by absolutely no means least One Direction(!!!!) (VIP courtesy of BooHoo!), which was a truly excellent experience. There were other bands too, who I’ve either forgotten about or just weren’t quite worthy of a mention. Next year I’m already looking forward to American Football, Mineral (again), Alvvays (oh somebody sell me a ticket for Manchester in January, please?), and hopefully some better hardcore shows. Bands I’m gutted I missed this year include Lust For Youth, Iceage, Slowdive (what is up with bands who only play in London??).

The absolute worst band I saw was Bam Margera’s Fuckface Unstoppable, a somewhat spontaneous evening thanks to a hookup by a friend, and an absolute assault on my ears, but I met Bam Margera so it was all worth it for my 14 year old self. 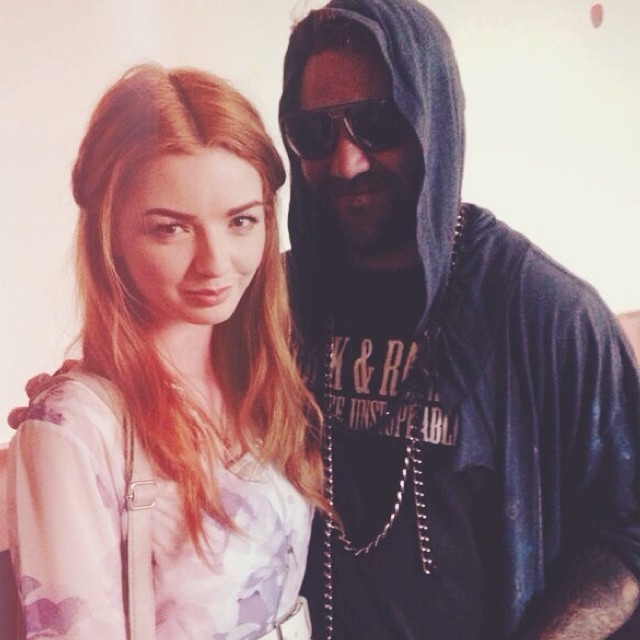 Me with Bam Margera (lol)

So all in all, 2014 hasn’t been a year in which I’ve been to many particularly ~cool shows, but one during which I have thoroughly relived my youth (a phrase which sounds ridiculous coming from a 21 year old, but you know what I mean) and also had some musical experiences I never thought would be possible thanks to the magic that is 90s bands being short on cash. Were you at any of these? I’ve linked to the Bandcamp or Lastfm pages of some of the more current bands I’ve mentioned here, do go and check them out. I wanna talk about music, so please let me know your thoughts on this post!